Happy Cinco De Mayo! A holiday where Mexico celebrates a victory over France in the Battle of Puebla in 1862 (not, in fact, independence from Spain). The battle represents a triumph of the underdog and calls to mind (for us, anyway) a time when labs were overrun by paper notebooks and spreadsheets, despairing of a… Read More

Most large laboratories have embraced implementations of modern Laboratory Information Management Systems (LIMS) over the past few decades. The LIMS, in many cases, functions as the heart of the laboratory and is a significant, long-term investment which is utilized and modified over decades. As computing technology has progressed and testing methodologies have evolved, so too… Read More

When you’re looking at what kind of Laboratory Information Management System (LIMS) to implement for your organization, one of the first decisions you need to make is the hosting situation; will your LIMS be hosted on-premises (pay per license; PPL) or cloud hosted—either as platform as a service (PaaS) or software as a service (SaaS)…. Read More

There has been a lot of talk recently about the use of technology in lab operations to save time and automate previously manual tasks, especially using a Laboratory Information Management System (LIMS). Much has been written about how LIMS can be used to automate processes in laboratories, and this advantage has not gone unnoticed. By… Read More

Warning letters; fines; or even jail time—don’t let these consequences descend on your organization! Prevent bad outcomes of agency observations with a thorough and accurate chromatography data system (CDS) validation. Most of the observations made by regulatory agencies with respect to computerized systems are associated with quality control (QC) systems, specifically CDS. Regulatory bodies audit… Read More 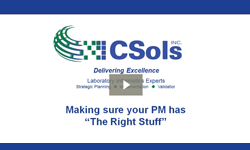