CSols Inc. > Instrument Integration > Why You Should Interface Your Instruments to LIMS

Why You Should Interface Your Instruments to LIMS → Related Reading: What Happened to Phase 2 of your LIMS Implementation?

Types of Instruments that can be Interfaced to LIMS

Instruments to be interfaced to a LIMS fall into three major categories:

Why Instrument Interfacing With LIMS Is Helpful

There are a number of reasons why it is beneficial to interface the lab instruments to LIMS.  Some of the most prevalent benefits of instrument integration are discussed below.

One of the best reasons to interface your instruments to your LIMS is the increase in lab productivity and scientist effectiveness it yields.  Removing the manual entering of data, or even the cutting and pasting of data from the instrument to the LIMS saves a ton of time and effort.

Likewise, if a bi-directional interface is being utilized, you will also eliminate the time required to enter the run information, parameters, etc. into the instrument system.  This can all be set up in your LIMS and then transferred over electronically to the instrument.  Increasing productivity and sample throughput are key goals in all quality control and testing labs.  Increasing effectiveness (i.e. increasing the amount of time available for a scientist to do science) is a key goal in research labs.

Another key reason to interface your instruments to your LIMS is the increase in data quality and integrity that it yields.  By removing the “human element” from the data transfer and entry equation, a huge source of error is removed.

Removing transcription errors will significantly increase the quality of your data.  A very large issue in laboratories that are coming under increased scrutiny in FDA regulated labs is data integrity.  How the data is captured and recorded from the source (i.e. instrument) to the data system (LIMS or ELN) is a major source of warning letters.  Instrument integration with your LIMS or ELN will greatly reduce the impact of this issue.

One of the complaints often heard by the scientists in the lab when a LIMS is implemented is that there was not much in the LIMS that helped them with their job.  In fact, they will sometimes complain that the LIMS has made more work for them and that they “Hate LIMS”.  One of the best ways to increase the scientists’ LIMS satisfaction is to interface the lab instruments to the LIMS. 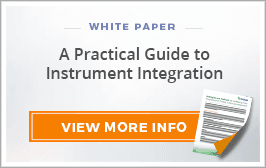 By doing so, you will have made a significant improvement in their work processes and will have saved them a ton of time and annoyance.  Not only will interfacing the instruments increase their LIMS satisfaction level, but it will also increase the rate of LIMS adoption since once the scientists feel that the LIMS actually helps them, they will be more likely to fully utilize it.  You will also be surprised at the number of new requests for additional functionality you will receive.

Have you interfaced your lab instruments with your LIMS?  If not, why not?  If you have, are you using the instrument interfacing facility from your LIMS or another software system?  What types of interfaces are you running?  Simple? Uni-directional? Bi-directional?

4 responses to “Why You Should Interface Your Instruments to LIMS”