CSols Inc. > Published Articles > Is SAP the only system you need to operate your Lab?

Is SAP the only system you need to operate your Lab? 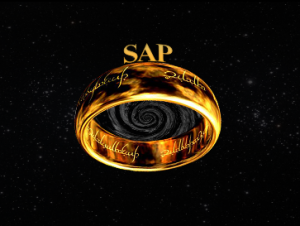 One by one the Applications of the Enterprise fell to the power of SAPron. Some resisted; a last alliance of Lab Analysts, Product Vendors and Research Scientists fought for the freedom of The Lab. But the power of the SAPron could not be undone. The promises of reduced TCO and “One Application to rule them all” corrupted the will of men.

SAPron’s quest for dominion had extended from the earthly Enterprise domain into the realm of the ether; Ariba, Concur, and Fieldglass all swore allegiance to SAPron and quickly succumbed to the power of the One App. Under the control of SAPron, they spread its hold – the whole world of commerce was falling into SAPron’s grasp.

For many an age, The Lab continued as before, blissfully ignorant of these new alliances, confident that they were insignificant enough not to be seen by the eye of SAPron. Despite predicting the demise of the kingdoms of The Lab for some time, SAPron had seemingly made few inroads into the realms of The Lab. Complacency set in and the rising storm clouds were ignored.

But unseen and unnoticed by many, SAPron had taken over seemingly innocuous elements of their realm. Quality assurance functions, specification management, and instrument management applications were no longer under the sole purview of The Lab. They were becoming bound to the One App under the guidance of QM. SAPron promised that he would integrate the power of the One App with those of The Lab, through the QM IDI-interface. It appeared that SAPron was no longer seeking total domination; rather a means of coexistence.

SAPron’s influence and the power of the One App had reached the highest levels in some kingdoms of The Lab. Some leaders were convinced that the One App would be enough to operate their Labs. However, their attempts to implement with QM and realize the promises of lower TCO produced mixed results. A level of success was achieved in low volume operations that performed simple analytical testing requiring no automation, but in medium-volume operations where there was a need to automate some of the routine tasks, additional applications were required. Applications that handled simple instrument integration and lab specific processing, such as LIMSLink, were often favored to fill this role. Despite attempts by SAPron to meet their needs, high-volume operations performing complex analytical testing continued the use of LIMS, which remained the only truly viable solution.

For now, SAPron appeared to be in retreat, with only those performing the simplest of operations, under the power of the One App. Was SAPron’s battle for The Lab over?

Through these skirmishes the need for coexistence between The Lab and SAPron had been established. But coexistence itself brought many challenges. Who should be the True Master of certain data, such as product and test specifications? Does QM need all testing results, final results, or maybe just a pass/fail indicator? Where should raw data be stored?

While these terms were being negotiated, SAPron was actively supporting new and improved terms of integration. He introduced XI to facilitate the exchange of information between the One App and other apps within the kingdom. Pleased with the accomplishments of XI, SAPron bestowed upon him the new name of PI. The people of The Lab were encouraged to expand their Lab apps and work with, rather than fear, the power of the One App. Perhaps coexistence could be realized after all.

However, building communication channels was not all that SAPron was doing. Unbeknownst to The Lab, SAPron had tasked SAPuman with the proliferation of more granular Lab functionality within QM, and the creation of more powerful functionality that could support even the most complex Lab needs. QM had once again been enhanced and was ready to be unleashed.

The Lab sought out alliances of their own. Overlooked by SAPron, the Research Scientists – the oldest and possibly the wisest inhabitants of The Lab – further strengthened their resistance with their ELN solutions. The unlikely alliance meant the resistance could now offer integrated lab informatics platforms that could be used from research and discovery through to development and manufacturing. 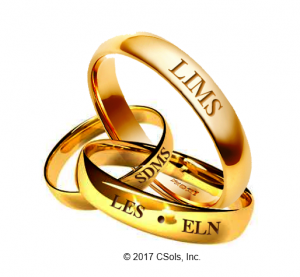 And nor were the Lab Product Vendors idle. Though the traditional LIMS was adept at sample management, it did not adequately address test execution. A new application, LES, was created to solve this problem. Surely the One App could not provide such functionality! Certain Lab Product Vendors also included SDMS into their integrated platforms, capturing, cataloging, and archiving data generated by instruments within The Lab in real time. SAPron may be ready for battle, but this time The Lab is prepared! What will be the outcome?

Without doubt the One App should be the Master, and should identify sources of all data pertinent to the supply chain within The Lab. But certain questions remain. What data is pertinent, and what is meant to bind them? Does bind mean assimilate or integrate?

The battle for dominion rages.